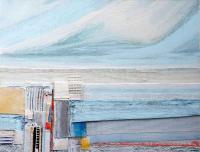 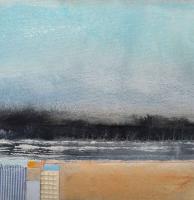 Although the early 20th century paintings of Picasso and Braque are cited as seminal in abstract art it was not until the 1930’s that the movement found its full swing as an avant garde movement in America.  And by 1950, Jackson Pollock and the Abstract Expressionists pushed their visions to yet another limit and established New York as the epicenter of the art world.

Since then, abstraction has been entrenched internationally as one of the most dominant forms of visual expression.  But the problem is that while many thousands of artists have tried their hand at abstraction the great majority have failed.  Although many artists have been sincere and passionate in their pursuit, the fact remains that too many abstract painters have fallen far short of what the British art critic Clive Bell, called “significant form” way back in 1913. He referred to that special orchestration of lines, shapes, and colors into certain combinations and relationships so that the completed work evokes an aesthetic ecstasy.  They move us.  It’s just that simple . . . yet so immensely difficult to pull off.

Eugene Healy ranks among those abstract painters who have clearly grasped Bell’s concept of “significant form.” For this artist, collage is a melody first heard as a thirteen-year-old growing up in Brooklyn, New York, where he was born in 1948. Among his early primary influences were Matisse, Vermeer, Diebenkorn, Rauschenberg, Hoffman, and the Fauve painters. He pursued his painting at New York Institute of Technology, earning his B.F.A. in 1972.

Starting in 1967, he began a long exhibition record with galleries and art museums throughout the country. He has also served as a curator, beginning in the late 1970’s, when he conceived and organized the popular traveling exhibition, American Vision, which was launched at New York University. Later, he served as Director of the National Artists’ Alliance, and as Exhibition Designer for the Yale Center for British Art. Jack Welch, the legendary former CEO of General Electric, is among the most enthusiastic collectors of Healy’s paintings.

Many of Healy’s paintings are abstractions of shore scenes, being places that have evoked particular moods and feelings in the artist.  And it is those feelings that he so effectively materializes by mixing mediums ranging from oil, watercolor, encaustic, oil crayon, lacquers, and colored pencil applied to fragments of canvas, boards, and paper. Often, one delights in the subtle addition of beach sand, fragments of printed fabrics, and even pieces of window screens. These are musical arrangements. Yet what is generally not known about the artist is that in the process of capturing those feelings just right he returns to each work, over and over, almost obsessively making changes until he is certain his expressions sing.

(Eugene Healy has an extensive exhibition record and is collected throughout the United States and Europe.)