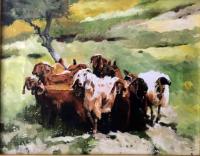 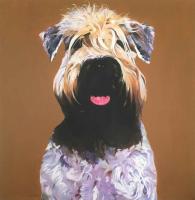 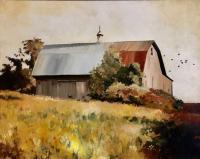 Dennis was born and raised in a tiny town in Iowa; two grocery stores,
two hardware stores, and one tavern. Summer Saturday nights were high school band concerts in the center of town with popcorn from the Boy Scouts’ stand on the corner. His father was a sheep shearer and his mother a homemaker. As a boy, it was good.

At 17 he went off to Drake University in Des Moines, earning a degree in commercial art, advertising and illustration.

Drafted during the Vietnam War he was sent, not to Vietnam, but to Fairbanks, Alaska. Inspired by what he saw there he began doing oil paintings of the animals and amazing Alaskan landscapes.

After the Army, when he returned to his job at LOOK Magazine, a friend
told him of a job in Hawaii. He went (how could you not!) and spent the next eight years living and working in Honolulu. During that time Dennis was commissioned to do illustrations of many local scenes and of several Hawaii natives; a Paniolo (cowboy), a hula dancer, a Hawaiian surfer, and others for the Bank of Hawaii.

Dennis has held art director/creative director positions at LOOK Magazine, Lennen and Newell Pacific, Needham Harper and Steers, and in New York, Doyle Dane Bernbach and Young and Rubicam. He has lived in Iowa, Texas, Alaska, Hawaii, Chicago and New York. He has been honored with many painting, advertising, and illustration awards. His painting awards include having two pieces selected as finalists in the Artists’s Magazine annual competition, Waiting to be Sent in 2013 and Sheffield Island Lighthouse in 2015.