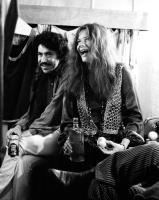 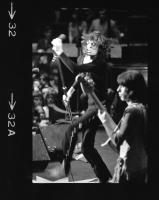 Lost in storage for nearly 50 years, the negatives for these photographs of legendary musicians, many at the very beginning of their careers, were recently discovered in Friedman’s attic in a box of business records. A time capsule of the 1960’s and 70’s music scene, on and off stage, the photographs offer a completely new view of Janis Joplin, The Band, The Rolling Stones, Todd Rundgren, Paul Butterfield, Kris Kristofferson, Rita Coolidge, James Cotton, and many more. Because the artists thought of him as a friend and not a professional photographer, his candid photographs capture authentic & natural moments rarely seen in Rock & Roll photography. Over the last 3 years we have shared over 100 images at numerous exhibits, events, and speaking engagements, including the California Heritage Museum, The Phoenix Art Museum Fundraiser, and a year-long exhibit at the Rock & Roll Hall of Fame where the collection will also be archived in perpetuity as The Michael Friedman Collection.

Originally from Westport, Connecticut, Michael was a music publicist, artist manager and music producer who started managing bands and producing records while still in college at the University of Arizona, selling his first record to Warner Brothers. His first job in the music business was as a publicist for the Mamas and Papas, Glen Campbell, Herman’s Hermits, The Hollies, The Turtles and The Bee Gees. He managed Todd Rundgren and his first band Nazz, and produced “Hello it’s Me” at the age of 24. A year later he found himself working alongside legendary music manager Albert Grossman in New York and Woodstock with some of the most important musicians of the time including Janis Joplin, The Band, and Bob Dylan. He later helped establish Bearsville Records, managed Kris Kristofferson and others, formed his own record company, worked with Clive Davis at Arista Records where he executive produced the first feature length rock video “One for the Road” by the Kinks and oversaw distributed labels including GRP Records.

While working in the music business Michael was also an avid photographer with a love for black and white photography. His subjects were often the musician friends he worked with and their performances. While a few of the photos were used for publicity and album covers at the time, most of the images had never been seen or published before because he preferred printing his own photographs and never had enough time in the dark room before he lost the negatives.

“It’s remarkable that Michael was there at this important flash point in music history and that he documented it with a great eye for capturing its energy and personality. It’s really an honor for the museum. On behalf of Rock & Roll fans all over the world, we’re very glad Michael found those negatives! “

Currently Michael is the grandfather of CCNS student Jack Hamann.