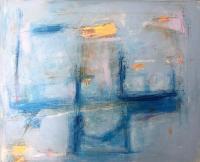 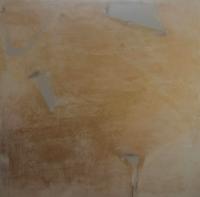 Local artist Dana Beringer’s concept of art as a direct, immediate expression of the artist’s

inner state appeals to the viewer's intuitive approach to her work. These works draw us into a

serene purposeful place almost sacred. Included in this show are works which exude a

dramatization of nature and the sea. Two pieces from her black and white series, her color

view. Her art expands from sketches made sometimes from an aerial view of coastal New

uses bold colors depicting these parcels of land and the water. The technique of building upon

layers with muted color adds texture and depth. Some of her canvases are almost transparent

with sweeping hints of color. Her paintings of seascapes come alive in an abstract expressionist

style. She plays structure against freedom.

Dana Beringer’s art is an improvisational expression of her ideas and emotions. She has

been painting since an early age. She has exhibited and sold in the United States and Europe.

Her work has been photographed and published.

The artist holds a BFA from CUA in Washington D.C.and a Master's in Art Therapy from CNR in

New York. Additional work may be viewed by appointment.